Did you know that the idiom "tagliare la testa al toro" (let's cut the bull's head), known throughout Italy, comes from the Venetian and dates back to something that occured 9 centuries ago? But first things first. Welcome to the 4th and last article of the Carnival 2021 series!

Today we finally talk about how Carnival was celebrated in Venice. Between commemorations and traditions there were plenty of rides and games, dances and comedies, fairs and exhibitions ... and parades!

The listonwas in fact a walk on which well-off people, in great pomp, exhibited their sumptuous costumes. At first this parade took place in Campo Santo Stefano  where there was a special lista selciata (from which liston) that crossed the hard court to prevent the nobles from ruining their outfits (the "campo" -fields- had not yet been paved at the time). As the fame of Venice Carnival increased, the parade naturally moved to the social center of the city: Piazza San Marco, where ladies, knights and cicisbei loved to show off and be admired, under the Procuratie Vecchie (today they have pictures taken instead!). 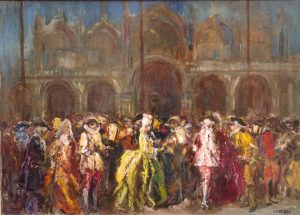 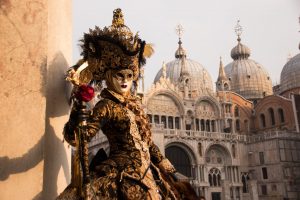 Among the customs Festa delle Marie is undoubtedly the oldest and evokes an event that took place back in 943 AD. Since then, a 400 people parade walks from San Pietro di Castello to Piazza San Marco on the second Saturday of Carnival. Today the 12 girls are selected with a competition that ends with the election of the "Maria of the year" who has the honor of impersonating Caterina Cornaro, the Queen of Cyprus, at the Regata Storica the first Sunday of September. 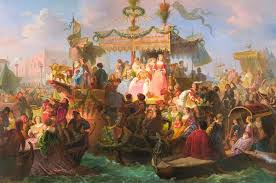 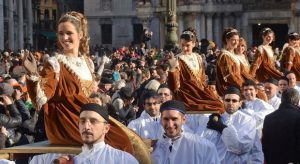 Another unique all-Venetian re-enactment is celebrated on shrove Thursday and is the basis of the saying "tagliamo la testa al toro", that is: let's end the matter here once and for all. In 1162 the Patriarch of Aquileia, backed by 12 allies and 12 prelates, attempted an insurrection which was immediately and severely quelled by the Doge (the head of the Venetian Republic) in charge and punished with an embarrassing tribute of 12 pigs, 12 loaves and a bull, to be "paid" every year as a warning. The bread went to the prisoners, the pigs to the Senate and the beheaded bull in the courtyard of the Doge's Palace, cut to pieces and distributed to the population. Today the trial agaisnt the conspirators has become a show on Shrove Thursday where the head is cut off of a paper-maché bull! 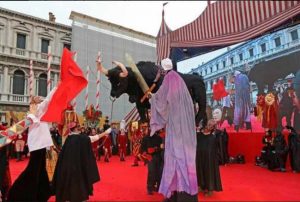 Throughout the city, from 1450 to 1600 the compagnie de calza organized the carnival entertainings and parties. These were clubs of young patricians who wore stockings according to the fashion of the time, marked by the colors of the Sestieri (districts) to which they belong. Towards the end of 1500 the government of the Serenissima will have to prohibit the "companies of the stocking" which in the meantime had become dissolute and aggressive. 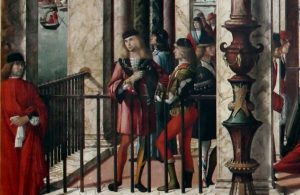 This is also the century in which Venice carnival attracts VIPs from all over Europe, bringing considerable benefit to an economy that was heading towards an inexorable decline, due to the new world overseas markets. In the main squares, as well as in Piazza San Marco, mobile wooden stages called machine(the machines) were built to stage the planned events, so that high-ranking guests and government authorities could admire the shows from the balconies of the palazzos without mixing with the populace. 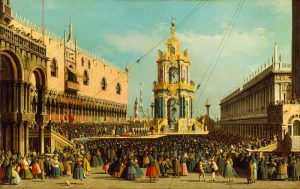 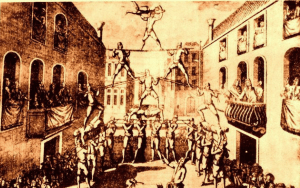 -the ballo della moresca, a war dance with curved swords that represented the endless dispute between Christians and Moors.
-the corse dei tori (the running of the bulls, a bit like in Pamplona) and the bear hunting; the goose catching and killing the cat with a shaved head (!!!!!) 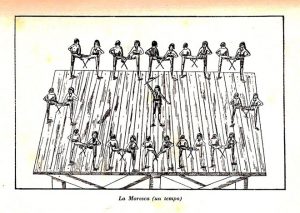 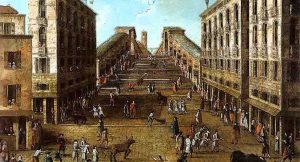 -thesvolo del turco", the so called sixteenth-century feat of a Turkish tightrope walker to reach the bell chamber of Saint Mark's tower, from a boat anchored in the quay. Later, this dangerous practice is substituted by the "flight of the angel", where a person with wings and suitably harnessed, went up and down along the same path, this time carrying a message of peace. At a later time to "fly" was a large wooden dove, which released confetti during its descent. Only in recent years there has been a return to the volo dell’angelo(flight of the angel), on the second Sunday of Carnival, when a celebrity engages in a spectacular descent into the square. 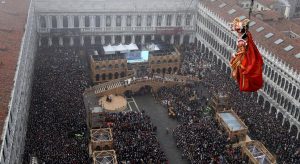 In addition, in the squares and along the main banks (see Riva degli Schiavoni), casotti (wooden huts) stood up to exhibit exotic animals, entertain the crowd with amazing shows (see Mondo Novo) or harangue it with all kinds of miraculous products and services (even the tooth picker!) sold by charlatans. 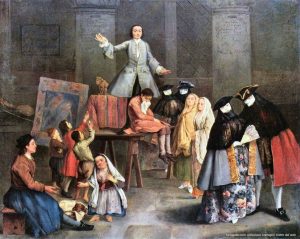 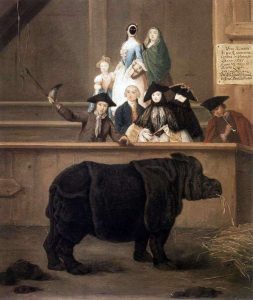 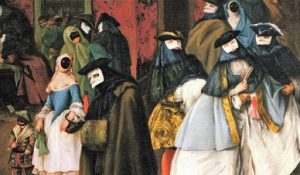 And when you were too tired, cold and hungry, you retreated to the "ridotti" (literally=reduced), those places where you could continue partying 'till early in the morning. The most famous is undoubtedly the Ridotto di San Moisé, active since 1638 for gambling, for enjoying courtesans, parties and entertainments of various kinds. Opened during the Carnival, which then lasted 4 months (!!!!), the Ridotto gained unparalleled notoriety by becoming a place attended by many travelers attracted by the worldliness and cosmopolitan environment of the Venetian carnival which offered the most intense and extravagant theatre season of Europe. With great joy of Venetian State coffers. The Ridotto could be accessed only by wearing a mask whilst the croupiers (decayed nobles called barnabotti). Il gioco più famoso era lo sbaraglino which in England was known as "backgammon"!!! 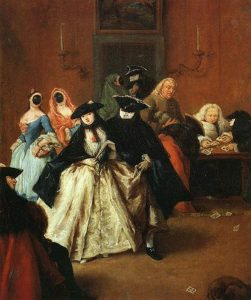 Wastes of capital, pimps and prostitutes attendance, collusion between usurers and noble tenants of gambling tables, caused a scandal, to the extent that on November 27, 1774, the Council of The Ten decreed its definitive closure. Today a prestigious hotel, of the OLDEST CASINO IN THE WORLD you can still admire the frescoed rooms. 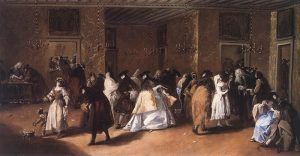 Let me end this series of articles by suggesting you to deep into this large and fascinating Carnival topic that will end next Mardi Gras (or Shrove Tuesday), to consult the program of Carnival 2021 (alas, in a mainly digital edition) and to contact me to live a genuinetour experience and discover the secrets of such unique celebrations. 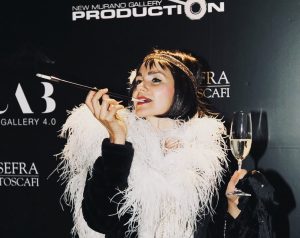 PrevPreviousCarnival 2021 #3: tailor-made mask and costume
ProssimoOwning an altana in Venice in 2021: a tailor made priviledgeNext 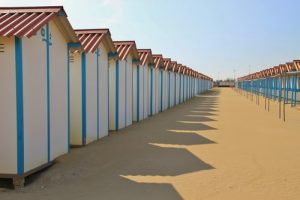